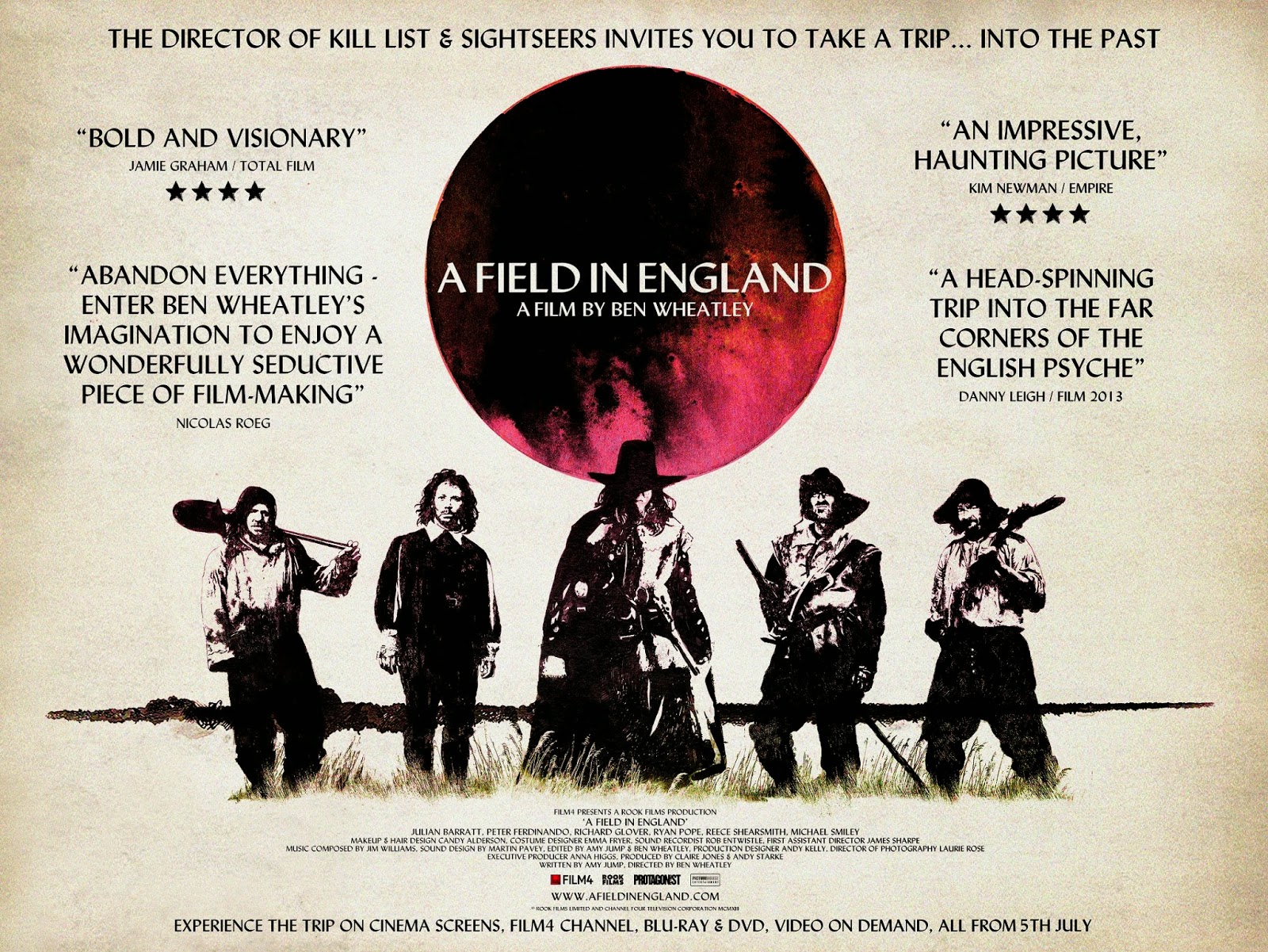 What It's About: With a week to go before the Ben Wheatley-directed season premiere of Doctor Who, here's another Wheatley movie review. What is A Field in England? Well, it's a movie about a group of English deserters who flee a battlefield during the English Civil War and encounter an alchemist, who captures them and forces them to dig for treasure in the middle of a giant field. Also, they're tripping on some psychedelic mushrooms they ate in a stew. Also, it's in black and white, and it has a strobe warning at the beginning.

Why You Should Watch It: In case you couldn't tell from the basic plot summary, this is...a unique movie, to say the least. It's basically a historical thriller with a lot of occult mysticism involved, though how much of it is "real" is ambiguous at best. Whitehead, our protagonist and one of the deserters, is an alchemist's apprentice, and clashes with rival alchemist O'Neill -- played by Michael Smiley, who played Gal in Kill List and will also be in one of Wheatley's upcoming Doctor Who episodes -- over some object of significance that he's stolen from Whitehead's master. While the others dig in a pit for the treasure O'Neill insists is buried in the field, the inevitable "wizard battle" between Whitehead and O'Neill basically comes down to Whitehead eating massive quantities of mushrooms and tripping his head off while everyone else still living tries to shoot O'Neill.

It is a very weird film, even harder to classify than Kill List. You're never quite sure what's going on, and it's unclear -- especially toward the end -- what's actually happening and what's hallucination. It's interesting just how much Wheatley and screenwriter Amy Jump do with so little. There's nothing to the movie other than five guys in 17th-century clothing and a wide-open field, but it manages to be funny and unsettling and frightening despite being entirely minimalistic. There are a lot of weird shots of the characters standing around in tableaus evocative of woodblock prints from that period, more weird shots of them pulling on a rope they find in the middle of the field for some reason, and some more weird shots of an ominous black planet descending from the sky (to which Whitehead expresses concern that "if you do not cease we may be blasted by an ill planet!"), and after Whitehead eats more mushrooms to gain more magic power so he can defeat O'Neill, there's a sequence that explains why they had that strobe warning. And because it's a Ben Wheatley movie, there's plenty of close-up physical trauma and facial destruction thanks to doglock pistols fired at point-blank range.

If there is a message at all, I think it boils down to "Don't eat those mushrooms you found."

Or maybe that if you find your courage, you can be your own master (and wear a cool coat and hat). But also the mushroom thing. 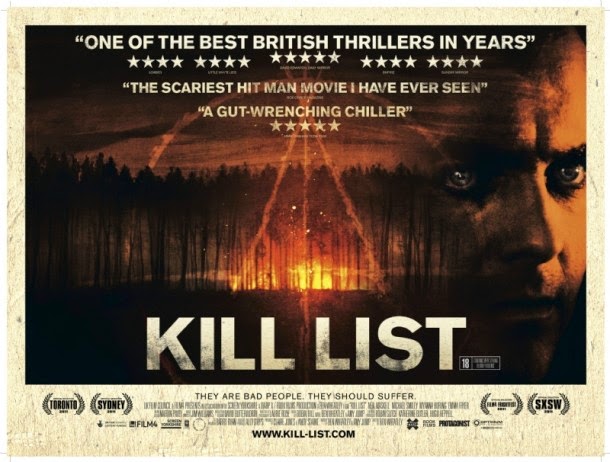 What It's About: We’ve only got two weeks to go before Doctor Who returns and we can all start arguing about it again, so I thought hey, why not review a couple of movies by Ben Wheatley, who directed the first two episodes of the new season? Naturally, when I think of people who should be involved in family television, the director/co-writer of two of the mind-screwiest, most unpleasant horror movies in recent memory is the first one that comes to mind.


Kill List, directed by Wheatley and co-written by Wheatley and frequent screenwriting collaborator Amy Jump, has a fairly simple setup. Jay is a hitman who’s been out of work for the last eight months after he and his partner Gal botched a job in Kiev. He’s out of money, tensions are rising between Jay and his wife Shel, and their son Sam is suffering for it. When Gal comes to visit and tells Jay of a new client willing to hire the two of them, Jay has no choice but to accept the offer. Gal is rightfully a bit creeped when the client requires that the contract be signed in Jay’s blood, but Jay doesn’t seem to think much of this, and they get down to business. As they work their way down the list of victims -- a priest, a librarian and an M.P., in addition to a few pro bono killings along the way -- it becomes more and more apparent that something much stranger is going on here than either of them signed up for. 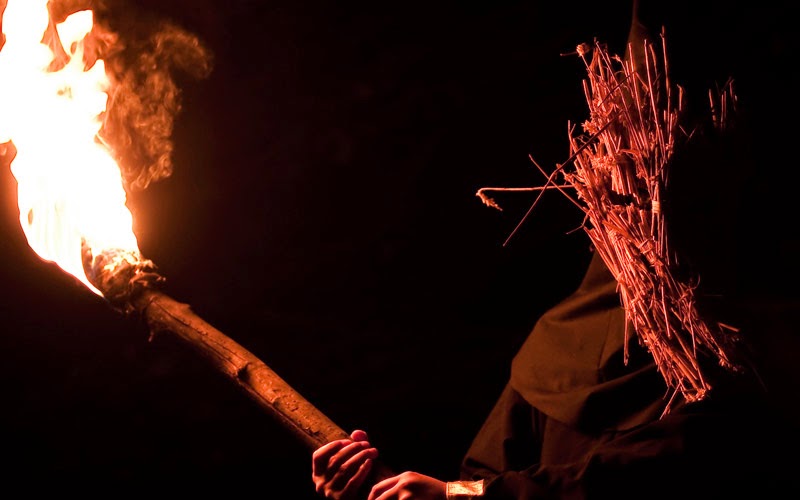 Why You Should Watch It: Kill List is hard to classify. It starts out as a domestic drama, changes into an unglamorous crime thriller -- sort of the opposite of a Guy Ritchie movie -- and finally moves along into supernatural horror without ever contradicting its own atmosphere or tone. I’ve heard it compared often to The Wicker Man, though I suspect that’s just because when mainstream critics review horror movies, they tend to have small reference pools since they don’t like horror, and certain developments toward the end of Kill List make for an easy visual comparison. Thematically, it has much more in common with Angel Heart, which I should review here sometime since it's on Netflix. It’s also shot through with a dark thread of Arthurian legend. King Arthur is a recurring theme, and the story itself was inspired by the trials Arthur’s knights had to undertake in order to prove themselves worthy of a place at the Round Table. Neither, I think, is the fact that the knights of Arthurian myth were essentially a bunch of violent thugs who just happened to be better than average at killing lost on Wheatley.


Kill List is a tense movie, sometimes difficult to watch, often so bleak and humorless that it might alienate some viewers. It’s never sarcastic or witty, never pokes fun at itself or at anything else. None of the characters are “badass,” they’re just violent. Said violence is brief but unflinchingly gruesome and unstylized (one scene in particular will turn even strong stomachs). The soundtrack is suitably droning, the imagery stark and Kubrick-influenced. It’s what critics would call a “slow boil,” as opposed to "a rip-roaring entertainment ride." When it finally does erupt into outright horror at the end, it’s nightmarish (which is to say dream-like) and seriously scary. Definitely not a “fun” movie, but a very well-made one. I actually recommend watching this twice -- there’s a lot of expertly-handled foreshadowing early on that you’ll catch the second time around, and one bit that makes the ending all the more dreadful in retrospect. 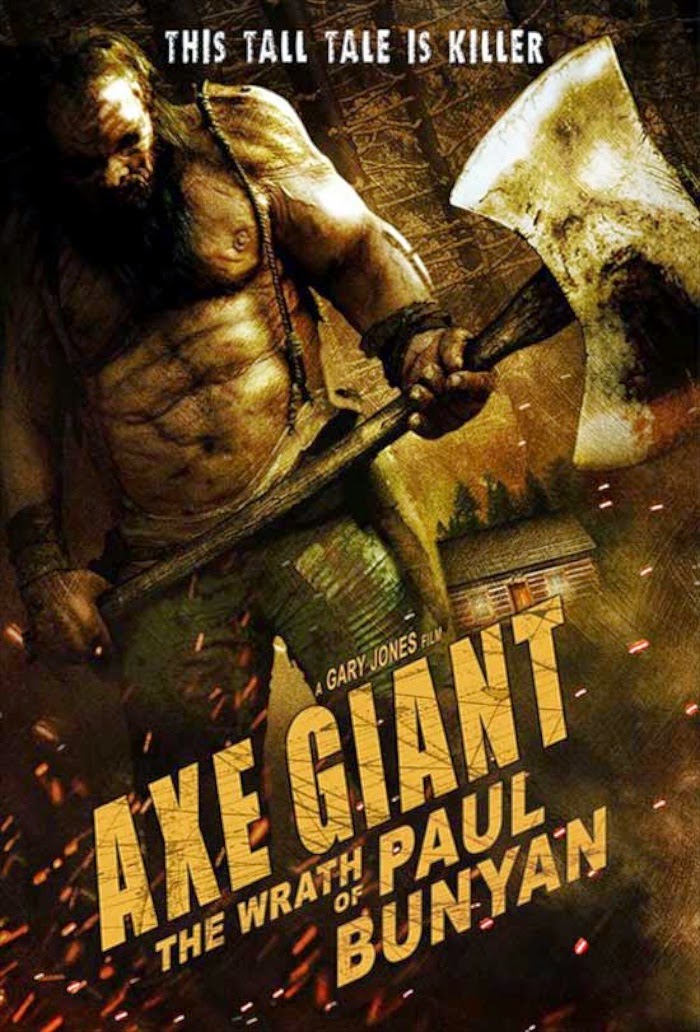 What It Is: Well, it’s a really terrible straight-to-video movie about a bunch of morons at a first-time offenders’ boot camp out in the wilderness. Pretty soon they run into Paul Bunyan, who looks something like a super mutant from Fallout wearing a flannel shirt and starts chopping everyone in half with his axe. Local crazy wilderness guy Joe Estevez gives everyone shelter in his cabin, where he tells them about how Paul Bunyan was a good (giant) kid and kept to himself until a group of settlers killed Babe the Big Blue Ox and ate him, driving Paul Bunyan into a rage and turning him into an axe-wielding slaughterhouse who tolerates no outsiders in his woods. There’s also a subplot of some kind involving Foreman Bill, played by Grizzly Adams, but it’s never particularly clear how his stuff relates to the main story, such as it is, until he and all the gun-toting militia guys who hang out at his bar show up at the end to deal with Bunyan. Then there’s a song called “The Ballad of Paul Bunyan,” which is about Paul Bunyan going nuts and killing a bunch of people with an axe.

Why You Should Watch It: Honestly, if you need someone to tell you why you should watch a direct-to-video horror movie called Axe Giant: The Wrath of Paul Bunyan, you probably shouldn’t watch it at all. The very fact of this movie’s existence makes my life just that little bit happier. There’s so much about this movie that amuses me to no end. That they included Babe the Big Blue Ox at all is delightful, and even better/worse since he’s a really awful CGI blue ox. Paul Bunyan’s size is also never consistent -- he could be anywhere from fifteen to forty feet tall from shot to shot because it’s a terrible green-screen effect -- which actually is consistent with the folk tales, which also never seem to agree on his size, but I don’t think the people who made this movie were thinking about that. The “early 19th-century settlers” look like they shop at TJ Maxx. 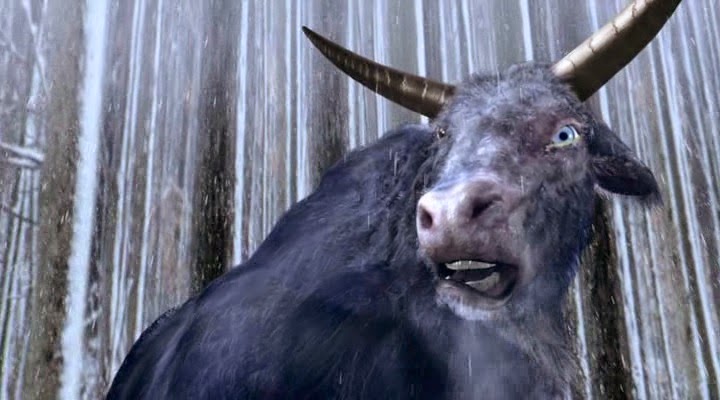 The thing is, I’m reasonably certain that the people who made Axe Giant are aware of all this, if only because the alternative is so unlikely. The Wrath of Paul Bunyan is a cut below the Asylum’s movies, and that...actually takes some effort. I think the people behind Axe Giant just run with it anyway, for what it’s worth. It’s not particularly jokey or self-aware, because the premise is ridiculous enough. If the title alone doesn’t at least make you giggle, this is probably not the movie for you. If it does, then the rest of the movie probably will too. For all its awfulness, it’s an enjoyable train wreck. Axe Giant: The Wrath of Paul Bunyan has heart, damn it. It is probably better than Think Like A Man or Grown-Ups 2. That's my endorsement.


Available On: Netflix, Hulu, YouTube. Seriously, it’s on everything except Amazon Prime. The YouTube stream is official. Please, do not pay money to watch Axe Giant: The Wrath of Paul Bunyan. I promise I’ll review something actually good next week.