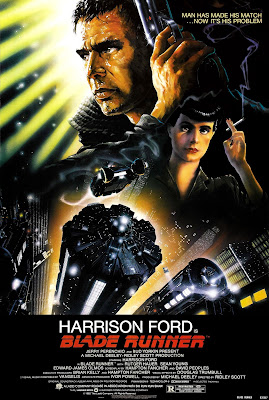 Today we have the dubious honor of recommending the worst version of the best movie ever made - not the best science fiction movie, not the best Harrison Ford movie, the best movie. The Theatrical Cut of Blade Runner is, on the other hand, what made me love this movie in the first place. It's also the only version available for streaming currently, since Amazon Prime took the Final Cut off its rotation a while back, so it'll have to do.

Blade Runner is a movie that predated and either influenced or predicted many, many trends in both the real world and in fiction, even if, like most SF, its timeline was way off. I can barely look at a city skyline at night without thinking of this movie. The way lights are arranged on top of police cars? That's because of Blade Runner. It was heavily influential on manga and anime in the 1980s, most notably Bubblegum Crisis (which featured a band called Priss and the Replicants) and Masamune Shirow's Ghost in the Shell, which was a big influence on near-future SF in its own right. William Gibson was writing Neuromancer when this movie came out, and he was afraid he'd be accused of stealing from it, since it is essentially cyberpunk before cyberpunk was even a term. (Most cinematic scholars - a group among which I can hardly count myself - actually see it as spiritual kin to Fritz Lang's Metropolis.) At the time, it was just a neo-noir detective story set in the dystopian future of Los Angeles, 2017, loosely based on Philip K. Dick's novel Do Androids Dream of Electric Sheep?. It opened to mixed reviews and didn't make much cash at the box office.

In this future, the Earth is in its final downward spiral. It's overpopulated. Radioactive dust from the atmosphere is settling on its surface. People with the means to do so are relocating to off-world colonies, where android replicants are used as slave labor. Rick Deckard (Harrison Ford) is an ex-Blade Runner, a replicant hunter whose job it was to "retire" replicants who went rogue and found their way to Earth. Replicants are faster, smarter and stronger - but they have a four-year expiration date before they seize up and shut down for good. Their defining psychological trait seems to be a lack of empathy, but this is the only way in which they differ from their human creators, and a psychological test is needed to figure out if someone is a replicant, if such a situation should arise. In order to counterbalance the strain of their short lifespan and the harsh conditions under which they "live."

So when a gang of replicants kill the crew of an off-world shuttle and go to ground on Earth, Deckard is brought out of his own retirement to track them down. Their leader, Roy Batty (Rutger Hauer), is the latest Nexus-6 model, essentially superior in every way to an ordinary human. He and the other replicants - Pris (Daryl Hannah), Zorah (Joanna Cassidy) and Leon (Brion James) - find assistance in J.F. Sebastian (William Sanderson), a reclusive genetic designer who is human, but also suffers from a condition that makes him age at an accelerated pace, giving him something in common, as Roy points out, with the synthetic humanoids whose genetic makeup he crafted. Roy's ultimate goal is to reach his creator, Tyrell, who designed the minds of the replicants and can - or so Roy believes - extend their lifespans. Meanwhile, Deckard becomes involved in a very questionable relationship with Rachael (Sean Young), an experimental replicant designed by Tyrell and implanted with the memories of his niece. 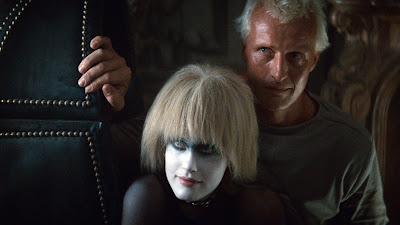 None of this is going to end well. It's not a happy movie. It is, however, probably the closest thing anyone has ever, or will ever, come to making a perfect film. I can't do this movie justice with a review. I can't tell you how much it's influenced me, how many times I've watched it or what it means to me - it's just too much. I think I own most versions of it. I have the Theatrical Cut on VHS, DVD and Criterion Collection laserdisc. I have the Director's Cut on DVD. I have the 30th Anniversary Edition, including all cuts of the film, including the workprint and the 2007 Final Cut, on limited edition HD DVD (it comes in a Voight-Kampff Machine case with a police spinner) and Bluray (it comes with a silver origami unicorn). It's at the top of my "top 10 movies of all time" list. Everything about it just clicks perfectly into place, from the incredible soundtrack by Vangelis to the singularly bleak urban atmosphere.

At its core, behind the detective story and the cat-and-mouse hunt as Roy tracks a wounded Deckard through Sebastian's creepy apartment building (the Bradbury Building, an iconic piece of architecture that's been featured in many a film and TV show) at the end, Blade Runner is an examination of what it means to be human. Deckard, after a career that basically consisted of murdering escaped android slaves, is dead inside. It would be easier to count the scenes in which he isn't drinking. Roy and Pris, meanwhile, mourn their rapidly dwindling lives. Between a man with many years ahead of him that he doesn't even want, and a group of people who never even had a chance to live, who are we really meant to sympathize with?

The differences between the Theatrical Cut and the others are mainly the result of executive meddling. There's a "hard-boiled detective" voiceover that provides some backstory and clarification, but is ultimately just not very well-written and breaks up the atmosphere. There's a long-standing urban legend that Ford read the lines badly on purpose, but he says he did the best with what they gave him, and I can believe that. The ending is also radically different; the Theatrical Cut ends on an disjointedly optimistic note that's entirely the result of focus-group testing, while every other version of the movie keeps the ending's tense ambiguity. And the last big thing that changes between cuts is the amount of evidence for the notion that Deckard himself is a replicant. I've been on both sides of this argument, and my current position is that it's unlikely. Yes, there's the origami unicorn left behind by Deckard's mysterious partner Gaff (Edward James Olmos), which seems to be a statement that he's gone over Deckard's potentially false memories and dreams and will be hunting him and Rachael wherever they go, but on the other hand, why create a replicant whose physical capabilities are inferior to those of the synthetics he's hunting? There's also something to be said for the idea that a definitive answer to the question of Deckard's nature would go against the entire point of the film.

So, by all means, watch the Theatrical Cut on Netflix, but consider picking up the Final Cut somewhere along the line. This review was a long time coming. I'll never be happy with it.

It should also be noted that Rutger Hauer's speech at the end was ad-libbed. It's an absolutely amazing piece of dialogue, probably the most moving death scene in all of cinema. The last words of a man who wanted only to live and to have his existence acknowledged.


Available On: Netflix.
Posted by Max at 7:36 PM No comments:

Who Are We Going To Call? 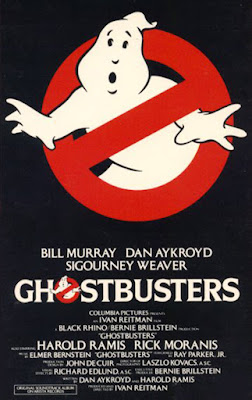 This July, we're getting a new Ghostbusters movie. I'm always wary of remakes and reboots, but it seems like this one at least has its heart in the right place. We'll see how it turns out this summer, but in the mean time, you can watch the 1984 original on Amazon Prime.

Ivan Reitman's horror-comedy is one of those movies that's had such a massive influence on American pop culture that you can't even point to one particular aspect that's become ingrained in our everyday lives. Dan Aykroyd and Harold Ramis' script is brilliant, the entire movie is eminently quotable, it's got a wonderful soundtrack by Elmer Bernstein and one of the most iconic theme songs ever courtesy of Ray Parker, Jr., and it features arguably career-best performances from some of the funniest people from those bygone days when SNL was funny, with a memorable supporting cast, especially Rick Moranis, William Atherton and Annie Potts. Ghostbusters is the movie I'll always think of first when I think of Bill Murray, before he entered the "melancholy bastard" phase of his career with Rushmore and Lost in Translation. 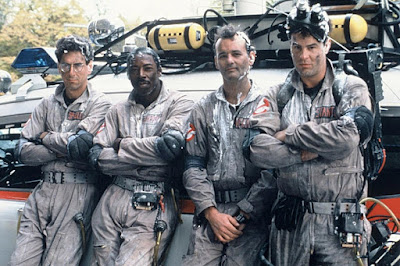 You've probably already seen it already. It's a distinct possibility that the only way you haven't seen Ghostbusters is if you've actively avoided it, somehow. It's amazing how well it all works. The actors play off of one another without missing a single beat, and it's funnier than any other three comedies I can name put together. They don't waste any time on backstory, but you get a solid sense of each character from the second they show up. Venkman is a complete and total asshole, and one of the best things about the movie is that he's basically just as much of an asshole at the end. Ray is the credulous, well-meaning paranormal scientist, Egon takes the science way too far and is completely disconnected from anything resembling reality, and the always-awesome Ernie Hudson joins the group as Winston, who's ex-military rather than an academic, but might be the only level head among the entire bunch. 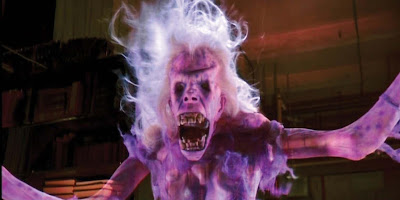 Also, I can't tell you how much this movie scared the living crap out of me when I was a kid. Just look at that thing. If there's one thing that worries me about the remake, it's that CGI, in general, just isn't frightening, there's nothing "there," the fakery is more obvious, and one balancing act that Ghostbusters has always achieved very well is sharp humor juxtaposed with genuine frights. The ghosts in the original are seriously terrifying. Gozer the Traveler is a distinctly Lovecraftian entity with no true form and a set of bizarre rules by which it's summoned. There's even something fucked up and distinctly unsettling about Slimer - I think it's those beady little yellow eyes. Bleh, just look at him. Ugly little puke. Originally, this was going to be a much crazier and weirder movie, with time travel and a bunch of other stuff, and I'm glad they kept it sort of grounded in a recognizable then-present-day New York City. 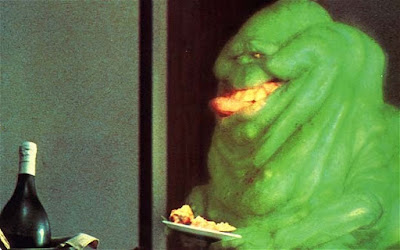 On a side note, one unequivocally positive thing to come out of the hype surrounding the Ghostbusters remake is that we're apparently getting our first Hi-C Ecto Cooler juice boxes in over 15 years. Ghostbusters contributed enormously to the over-saturation of slime-fascination toys that were prevalent in the 1980s. There are a lot of things I wish kids these days (obviously, I'm shaking my cane as I say that) would have the benefit of experiencing, but the top two might be 1. arcades, and 2. slime. I had Gak, Mad Scientist, Ghostbusters Ectoplasm and half a dozen other probably-toxic slime toys when I was young, and I hope that sort of thing makes a comeback.