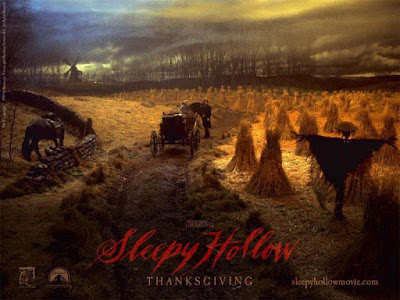 Tim Burton is one of the directors whose movies defined my childhood. When I was a kid, I remember that we had movie day on Fridays in school. After we'd finished our morning work, if we had finished our homework for the week, they'd roll in a TV and VCR and we'd watch The Goonies or Labyrinth or The Dark Crystal or Willow or Beetlejuice. I must have seen Beetlejuice about twenty times. I saw Edward Scissorhands at least five times in the theater and wore out the VHS tape. Mars Attacks remains one of the most mean-spirited comedies ever made. Burton was on a roll all through the mid-80s to the new millennium.

Sleepy Hollow came out when I was in college. Washington Irving's story lends itself to Burton's visual style, because Burton is basically Edward Gorey, if Edward Gorey had a fetish for putting Johnny Depp in greasepaint. Ichabod Crane was an uptight, cowardly schoolteacher in the original, but here he's an uptight, cowardly detective whose forensic methods of crime-solving put him at odds with his God-fearing Victorian counterparts. Eventually he makes enough of a fuss about late-1800s investigative techniques that he's exiled to the small Dutch community of Sleepy Hollow in upstate New York, where a number of bodies have recently turned up headless. 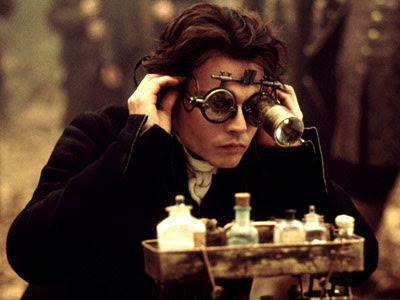 Upon his arrival, Crane almost immediately causes a stir, as the insular community of founding families and relatives is slow to trust a progressive-minded outsider, and he quickly connects with Katrina van Tassel, daughter of Baltus, the patriarch of the richest land-owning family in the Hudson Highlands, earning him the enmity of her admirer Brom van Brunt (Casper van Dien, who we last saw in Starship Troopers). Crane initially dismisses the townsfolk as a credulous bunch of country idiots after they tell him the horrifying story of a berserk Hessian mercenary who once plagued the village and its surroundings before being beheaded and buried in an unmarked grave in the old haunted woods nearby.

Utterly confident in his scientific methods, it's not long before Crane witnesses an attack for himself and has a total breakdown, as everything he'd come to believe about the way the world works has now been turned on its head. When he finally snaps out of it, he realizes the headless horseman is only a tool, a sort of living murder weapon under another's control, and that the real culprit is tied to a conspiracy among the local families, which he sets out to solve before his own head rolls. 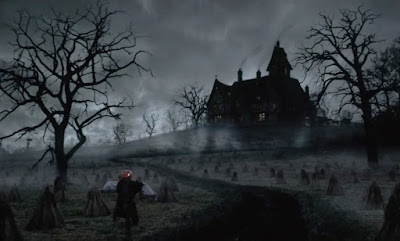 This was Tim Burton's last good movie, with his next effort being the fairly miserable Planet of the Apes remake, which was nearly devoid of all the "Burtonian" elements that are so prominent in Sleepy Hollow. Although Beetlejuice gives it a run for its money, Sleepy Hollow is also probably his best. It was one of his very few R-rated films -- territory he's rarely visited since, and in which he's considerably more at ease than M. Night Shyamalan was when he made The Happening. Blood sprays all over the place, kids die, heads are chopped off, people are cut in half -- it's a surprisingly bloody movie when you're more accustomed to his earlier work; Ed Wood only earned an R rating for language and drug use. 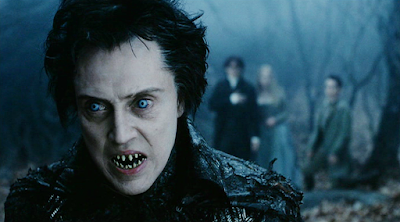 Burton's visuals are superbly creepy here. The village is dark, dingy and run-down even in daylight, and the fields and farmlands around it are full of ominous haystacks and crooked scarecrows (one of which bears a close resemblance to The Nightmare Before Christmas' Jack Skellington). At night, literal tendrils of fog creep in from the overgrown wilderness of the Western Woods to extinguish torches and lanterns.

Sleepy Hollow has an extremely strong cast. Johnny Depp hadn't yet become a caricature of himself, and Crane is an adorable coward who's more than willing to use Katrina and kid sidekick Young Masbath as human shields even after he's resolved to confront the horseman. He's sometimes hilariously inept at investigating the mystery, as he tends to arrange all his evidence in the correct order purely by accident and then draw an almost completely unrelated conclusion from it. The town elders are a fine ensemble including Michael Gambon, Ian McDiarmid, Richard Griffiths, Jeffrey Jones and Michael Gough. There are some memorable cameos as well -- most of all Christopher Walken as the pre-headless Hessian, who has no lines but makes the most of his filed teeth and berserk snarling. If there's a weak link, it's Miranda Richardson, who's ordinarily a skilled actress but gets some of the movie's worst dialogue and hams it up just a bit too much when her character becomes significant near the end. 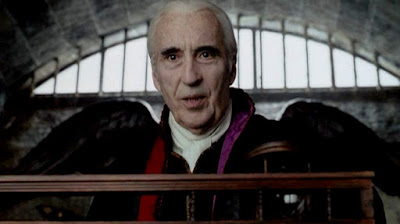 One final observation: this is also probably the most Freudian movie I've ever seen, and I kind of wonder if anyone else sees it this way, as I've never seen this aspect touched upon in critical reviews. Powerful male authority figures are responsible for much of the pain and turmoil at the heart of Sleepy Hollow. Crane's father was a zealous tyrant of a minister whose torture of Crane's mother still haunts their son, who has mostly suppressed the memory of it. Baltus van Tassel's past indiscretions become significant when the conspiracy comes to light. Then there's the late Christopher Lee's excellent cameo as a menacing judge, framed with a pair of black wings behind him, who commands Crane to investigate the beheadings and closely resembles Crane's father, likely a deliberate choice on Burton's part. The portal through which the horseman emerges into the mortal world is a pretty close approximation of a birth canal. Magistrate Phillipse keeps an ankh (a symbol of life and balance, combining masculine and feminine symbolism) around his neck as a talisman against the horseman. And on a good day, back then, Burton sort of looked like Depp, and here he casts his then-wife Lisa Marie, with an extremely low neckline and corset, as young Crane's mother, so -- there's a lot of weird psychological shit to pick apart in this movie if you want to. 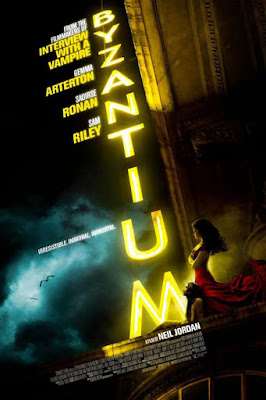 "I am Eleanor Webb.
I throw my story to the wind, and never will I tell it more."

With a screenplay adapted by Moira Buffini from her play "A Vampire Story," Byzantium is Neil Jordan's second vampire movie, made nearly twenty years after Interview with the Vampire. Some critics felt that it was simply a gender-flipped version of Interview, which is true in some ways -- particularly in the relationship between its two vampire protagonists, Clara and her daughter Eleanor, though unlike Lestat and Louis, Eleanor is Clara's daughter by blood as well as by her conversion into a vampire.

Outwardly devil-may-care Clara (Gemma Arterton) and quiet, melancholy, red-hooded Eleanor (Saoirse Ronan), live in relative poverty, as they have for the past two hundred years. Clara works as a stripper or as a prostitute, while Eleanor, being forever sixteen years old, attends school. They're forced to flee London when an agent of the Brotherhood, an order of vampire brethren, arrives in search of Eleanor -- an "abomination" in the eyes of the Brotherhood, for reasons we don't find out until later. Hitching rides along the coast and sleeping in cabbage patches, the two eventually make their way to a gloomy seaside town, where Clara takes up prostitution once again and encounters Noel (Danny Mays), a lonely man grieving the death of his mother. Well-intentioned Noel takes the two of them in, letting them live in his huge, dilapidated boarding house, Byzantium -- but it's only a matter of time before the Brotherhood comes looking once again. 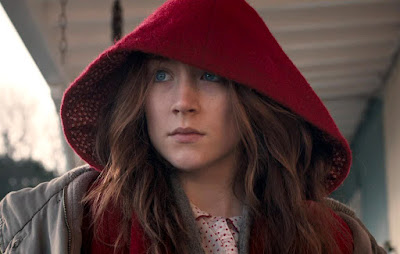 Byzantium's vampires are much stranger than Interview's. Here, a vampire is made when a person ready to die travels to a cursed island, which houses a ruined shrine inhabited by an ancient...thing called the "Nameless Saint." They aren't affected by sunlight or crucifixes. They don't have fangs, either, instead using a long thumbnail to puncture a victim's vein and drink their blood. They do seem considerably stronger than the average human, as Clara routinely overpowers human men much larger than herself, and it's subtly implied that they require an invitation to come into a person's house. While they don't just immediately turn evil, the sort of person who becomes a vampire is invariably Byronic and conflicted in the first place. Clara, while ruthless in her own words, murders pimps and abusers, while Eleanor only feeds on those who are tired of living and give consent.

Most of the tension between Clara and Eleanor is parental. Eleanor wants a normal life, but when she strikes up an uneasy relationship with a sickly hotel busboy, Frank, her mother goes so far as to try to murder him in order to keep Eleanor dependent on her. Clara has her own troubled past, as she was born poor and spent her childhood collecting cockles on the shore before being taken away unceremoniously by the monstrous Captain Ruthven and forced into a life of prostitution, during which she gives birth to Eleanor. When Ruthven is offered a chance to join the Brotherhood, Clara, who is dying of tuberculosis, steals the map to the island and becomes a "soucriant" herself, setting the entire story in motion. 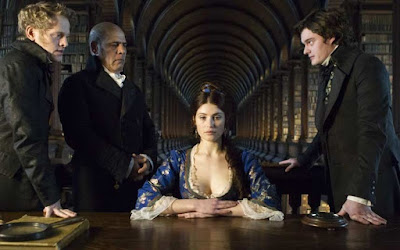 Byzantium is a much slower and even more brooding movie than Interview, whose vampires lived among the aristocracy. Here, their lives are in shambles, something reflected in their crumbling, nearly deserted environment. There's none of Interview's humor to be found here, but that's not necessarily a bad thing in a bleak movie where it would seem out of place. The damaged relationship between Clara and Eleanor over the course of two centuries is the heart of the movie, and Arterton and Ronan are both excellent as a pair of complicated women. The scenery is beautiful in its desolation. In many ways it's a very different movie than Jordan's previous venture into the subgenre, despite its apparent similarities, but it's no less worth watching for it.