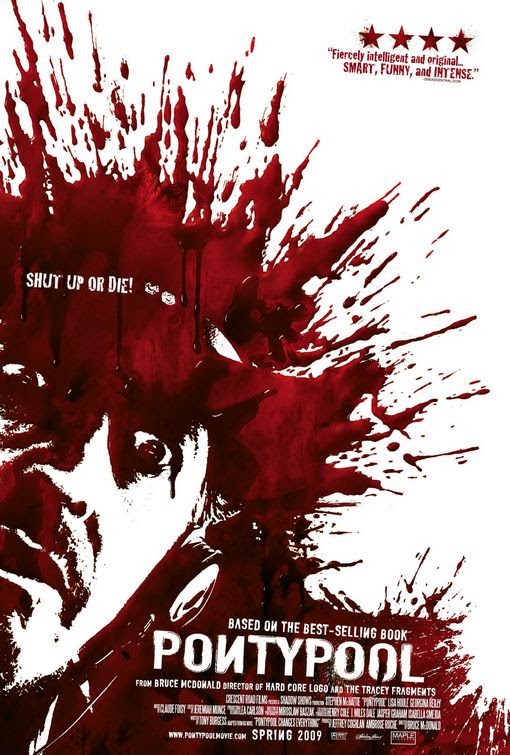 What It's About: Pontypool is a kind-of-zombie movie directed by Bruce McDonald and written by Tony Burgess, who also wrote the novel it's based on. Grant Mazzy is a big-city shock jock whose "offend everyone" style of disc jockeying finally gets him exiled to the small town of Pontypool, Ontario, where he takes over as an early-morning radio announcer. On his way to work, he has an unsettling encounter with a distraught woman who vanishes into the early-morning darkness. During his broadcast, Grant and his co-workers, station manager Sydney Briar and technical assistant Laurel-Ann Drummond, receive increasingly bizarre reports concerning isolated incidents of violence which seem to be rapidly expanding into an all-out epidemic.

Why You Should Watch It: This is one of the best zombie movies I've watched in a good long while. It certainly has the most interesting concept, even if it does borrow quite heavily from Neal Stephenson's Snow Crash. (At least it doesn't pretend otherwise, as a copy of the novel is seen prominently on display in one shot.) Stephen McHattie is fantastic as Grant Mazzy -- I'd never seen him in anything before, and because of this movie he's become one of my favorite rarely-seen cult actors -- and the minimalist cast serves the movie well. It's about three characters stuck in a snowbound radio station in the wee hours of the morning, listening to a strange kind of zombie apocalypse overtake the region.

Until it isn't. About two-thirds of the way through, it shifts into a kind of postmodern deconstruction of language and the meaning of words. Unfortunately, this is where it starts to fray at the seams, turning from a smart, tense horror film into a weird zombie siege that's at once less comprehensive and more reliant on standard zombie movie cliches. It's not bad, by any means. The last third just isn't as strong as the first hour or so, though I do give them credit for making Canadian French/English bilingualism a plot point, and the post-credits scene is impressively bizarre. The "plague" is just more frightening when it's audio-only, and given its connection to language, the idea that certain words are infected and can only be cured by destroying their meaning in the mind of the infected person, it's no coincidence. I've heard that originally, it was only going to be audio -- the pre-credits sound wave was to persist through the entire movie. That might've been a bit too far in the other direction. As it is, the movie is fantastic for a while, then just good. Overall, it's better than most, and it's certainly unique.