Before the review, I think I should write some personal stuff. Partly to get it off my own chest, but mostly just in case anybody reading is in the same boat, or has been in the same boat, and might find it helpful in putting things into perspective.

I've been struggling with acute depression for a long time now -- not knowing it until the last couple of years, and, not knowing it, not doing anything about it either. Restarting this blog with a different concept and structure in mind was one thing I did last March or thereabouts in order to fight that, so this isn't entirely unrelated. Depression is like watching a horror movie. You watch someone going up the attic stairs with nothing but a candle or a flashlight, and no matter how many times you tell the doomed idiot onscreen not to go up there and get herself murdered, the movie will inevitably play out the same way every time. She always goes upstairs. She always finds her boyfriend's mangled corpse. She always dies. Only in this case, the person doing all this is you, and still...all you can do is watch. You're perfectly aware that you should be doing something else, and you're also aware that it will play out in the same way it always has -- and knowing that somehow makes it worse. 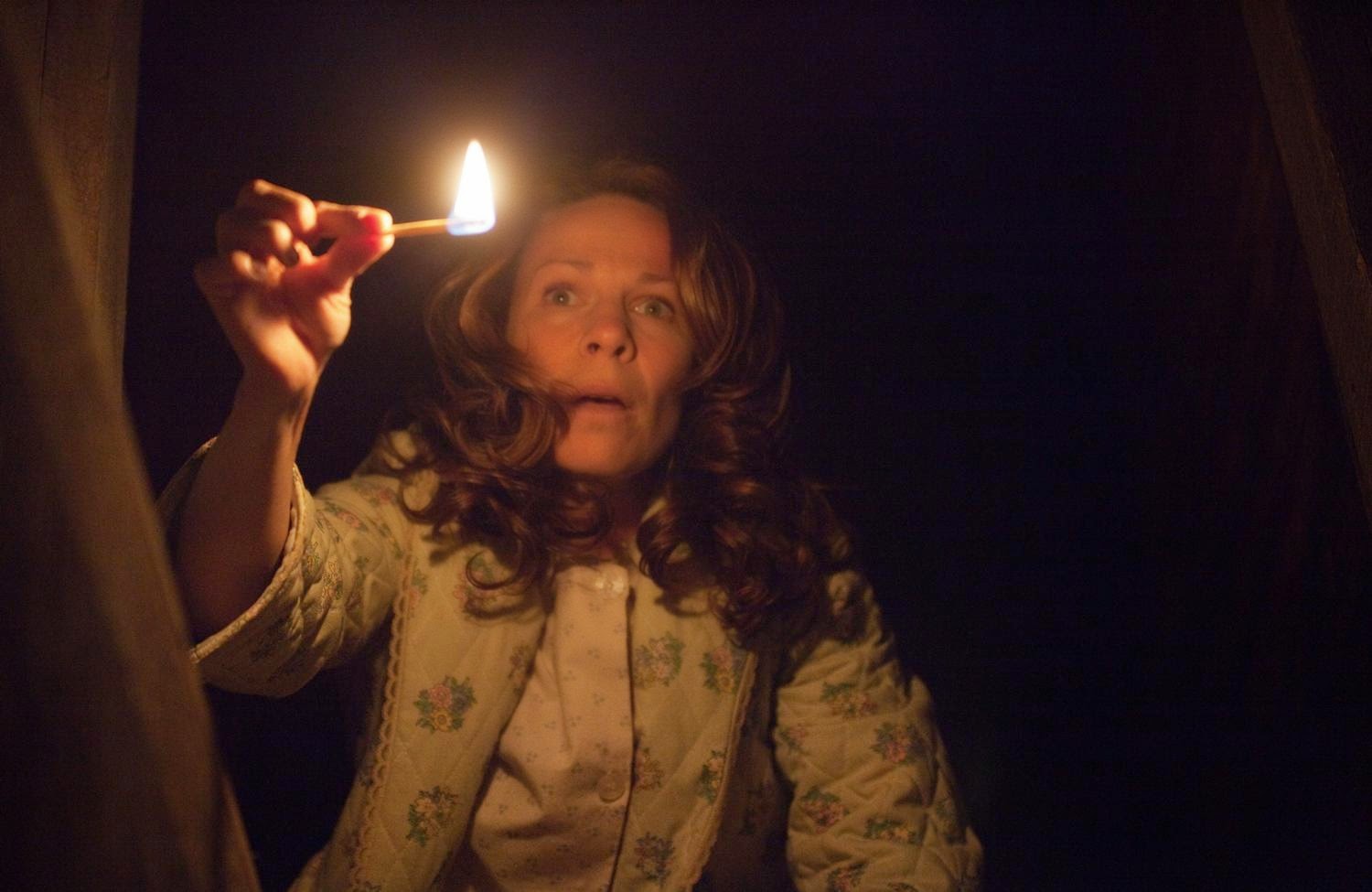 Other people try to help. They tell you not to be angry, or sad, or to let the things you can't control get under your skin. Naturally, at this point, you're probably stuck between wishing your own emotions had that convenient on/off switch that other people seem to have, and asking, "Well, that's brilliant, why didn't I think of that before?" Don't be sad. Problem solved. As frustrating as this is, you can't even blame them, because they're just trying to help with something they don't understand. This also makes it worse. You can't blame them, so, as with everything else, you blame yourself. (Note to anyone else reading who may have a friend who suffers from a depressive disorder: don't tell them to get over it, don't tell them to just be happier. It does about as much good as stabbing Jason Voorhees.) 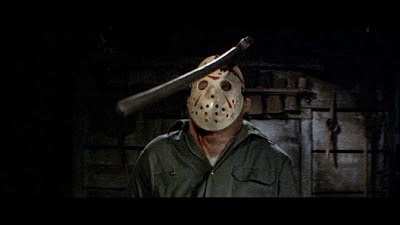 So, how do you get over it? You don't, really, but getting rid of the worst of it, reducing it to a sort of background radiation, is down to you, and only you will know when this is even a possibility. Two things happened to coincide that made me realize that if I didn't change my perspective, I was going to end up jumping in front of a bus someday after work. One of these things was that a coworker who really needed to be fired was fired. This coworker reminded me entirely too much of myself. She was angry all the time, constantly complaining about everything, eventually talking at great length, out loud, about punching out her supervisor and everyone else in the office she didn't like (well, all right, that last part was something I never did). For a while I had been thinking, My God, is that what I sound like? Do people think of me the same way? After she was fired, morale improved in the office. My morale improved. My own complacent cynicism and constant petty misery, which I saw reflected in this other person, made the office a better place through its absence.

This was a sort of curtain lifted from my eyes. At the same time, the other thing that made me realize what a boring, worn-out pessimist I was (and still am, though not to the same extent, and not for lack of trying) aired on TV -- True Detective. This is probably the best new show to air in the last five years or so. It's the closest thing we'll ever get to a Call of Cthulhu TV series. Rust and Marty, the two protagonists, are kind of terrible people, but you end up caring about them anyway. Again, I heard too much of myself in Rust, and while his world-weary, misanthropic nihilism was funny at first, I eventually realized what a wreck it had made of him. I decided, in a moment of clarity, that whatever sort of person I ended up, it would not be a miserable, alcoholic, self-hating shell of a human being, waiting for an excuse to give up on life. I wouldn't let the little things get to me. I wouldn't be sad -- not all the time, anyway.

Of course, like I said, you can't just get over it. After you decide to keep going another day, another year, instead of jumping in front of the nearest truck, you may be out of the woods, but you still need something to keep your mind off of it so you don't keep looking back toward the tree line. I need more of these distractions, but resurrecting this blog was the first. Even when you think you're done with it, you're not. Like the Stephen King story says -- sometimes they come back. As long as your brain is a mix of chemicals, electricity and meat, and depression is causing that particular machine to function imperfectly, you're going to need a distraction. I stopped writing this blog for a couple of months, and I doubt it's a coincidence that I find myself criticizing myself more sharply, looking back toward the edge of that pit.

Anyway, that's enough out of me about depression. Let's get this back on track with one of the classics. 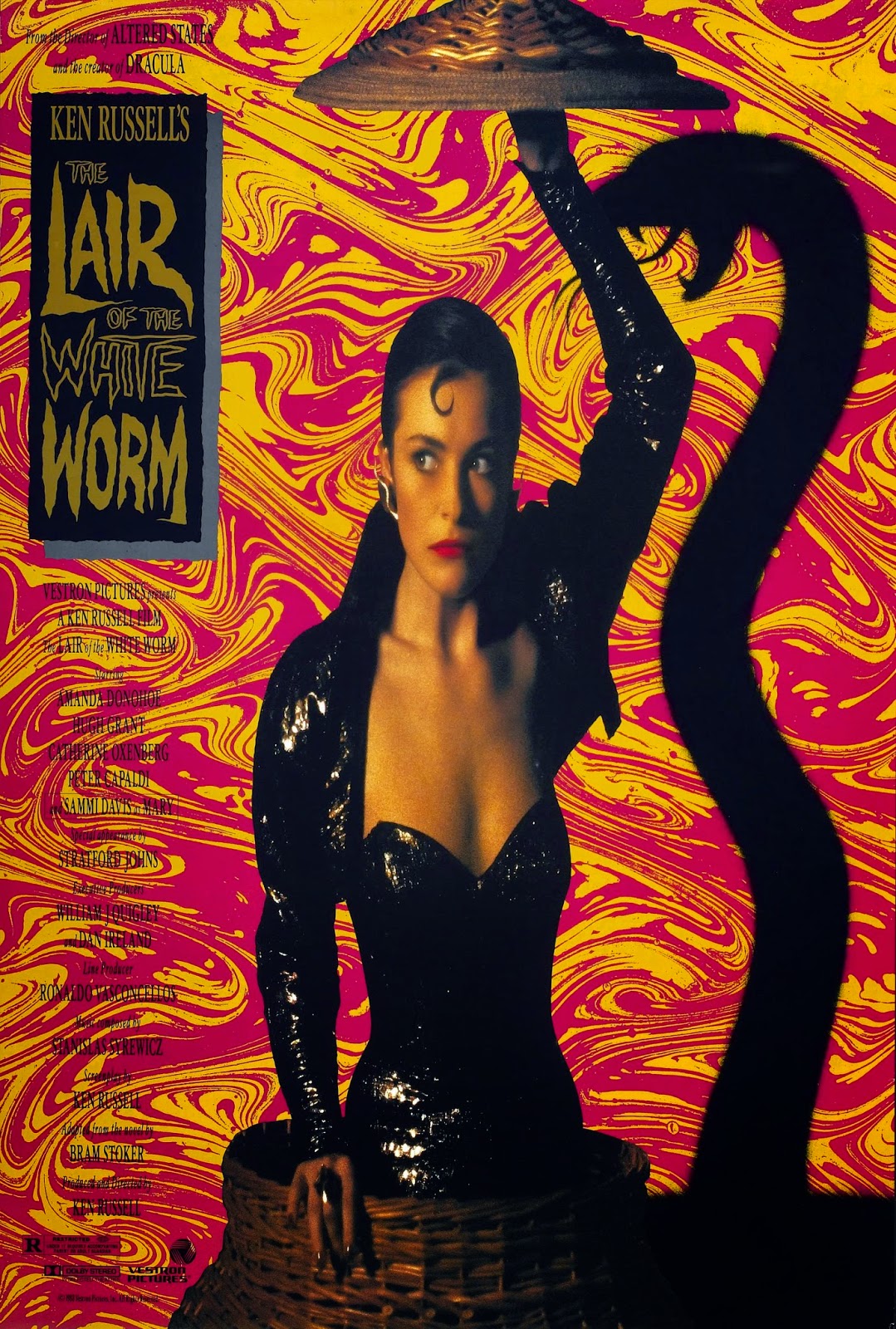 The Lair of the White Worm is a trippy 1988 horror film from the master of trippy horror films, Ken Russell, who was also responsible for Altered States and Gothic, the latter of which is really weird. Lair stars Peter Capaldi -- who you might recognize as the twelfth and current Doctor on Doctor Who, except that here he looks like he's about eighteen years old and has the most ridiculous hair ever -- as Angus Flint, a Scottish archaeologist who finds an ancient reptilian skull in the backyard of his landlords, the English sisters Eve and Mary (get it?) Trent. It also stars an equally baby-faced Hugh Grant as James D'Ampton, heir to the property and new Lord of the Manor. He's basically a bored, rich playboy with nothing to do but be bored and rich; he certainly doesn't care too much about his legacy, as one of his ancestors supposedly slew the legendary white dragon, the D'Ampton Worm, a bit of backstory explained to Angus at a party thrown by D'Ampton. There's also a pretty awesome folk rock song about it.

Lair is a vampire movie -- sort of. Here, vampires are snake-people who worship the Roman snake god Dionin. They're still seductive, and they still turn you by biting you, but they can also spit acidic venom that makes you hallucinate. The chief vampire is Lady Sylvia Marsh, another recent arrival in the area. Lady Marsh has just moved into a long-deserted local manor, Temple House, which happens to be near the entrance to Stonerich Cavern, where the Trent sisters' father vanished while exploring. She spends most of her time indulging her fondness for black leather, Snakes and Ladders, and eating wayward schoolboys. As master vampires go, Lady Marsh is gloriously campy, one of the best you'll find on film. 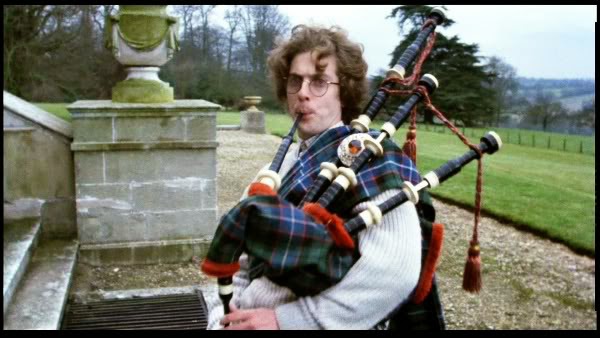 The Doctor forgot his sonic screwdriver,
but at least he remembered his bagpipes.

The entire movie is pretty ridiculous, actually, which is mostly why I recommend it. It's fully aware of its absurdity, with its unabashedly kinky sexuality, acid-trip vampire bites and the monsters' weakness not to garlic and sunlight, but bagpipes, mongooses and snake-charming records. It also has Hugh Grant chopping a snake-lady in half with a claymore, then falling into a set of drums. If that doesn't make you want to watch something, I don't know what will. 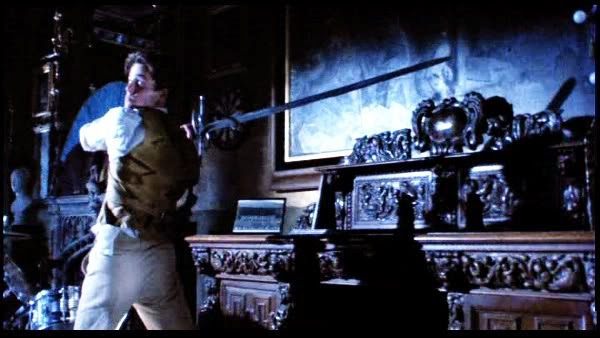 Trivia: Lair of the White Worm is loosely based on a novel of the same name by Bram Stoker -- his final work to be published (in 1911).