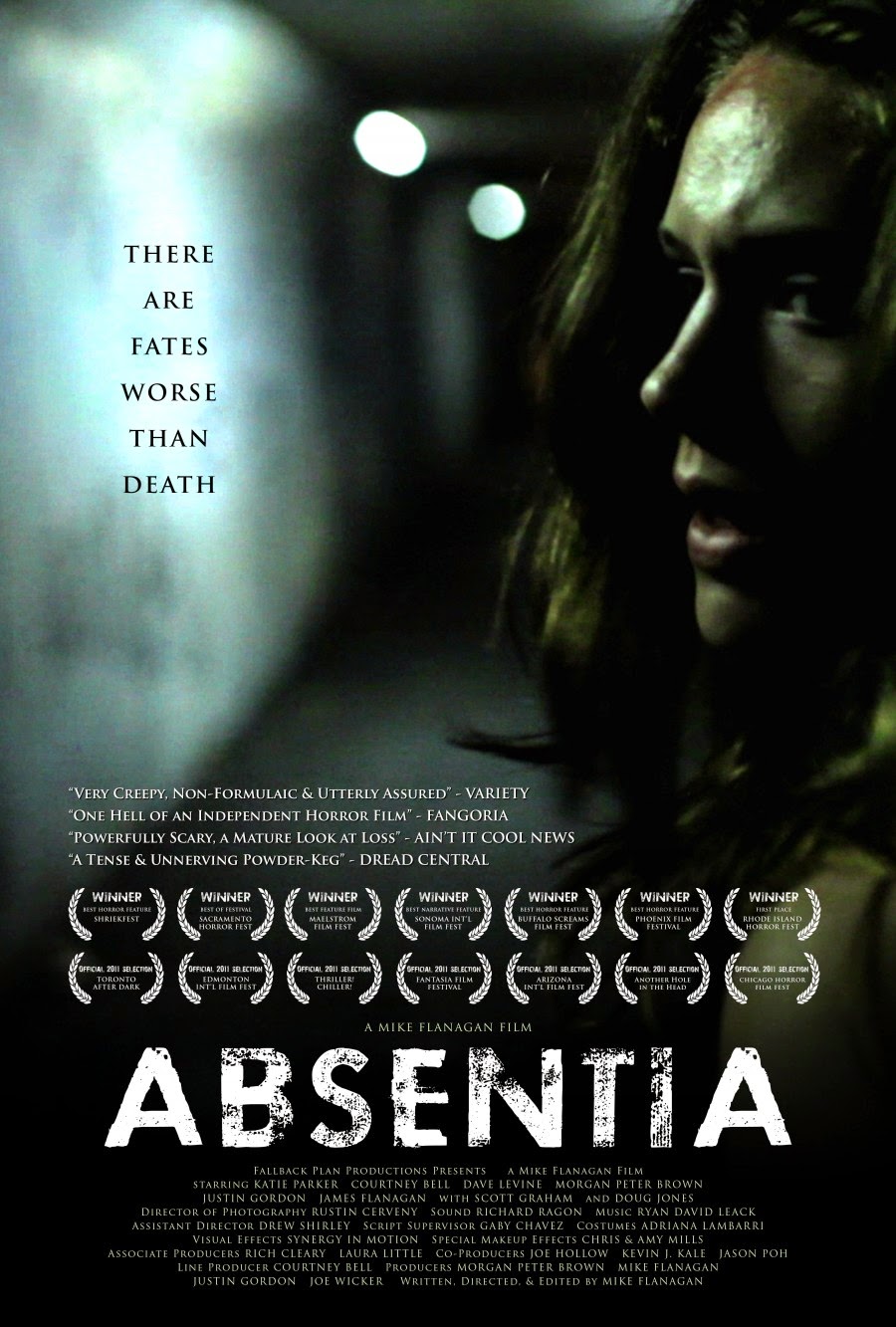 What It's About: Tricia's husband Daniel has been missing for seven years, and she's finally ready to have him declared dead in absentia. Her younger sister Callie, a recovering drug addict, comes to live with her and help her sort through the wreckage and move on with her life. While jogging through a nearby tunnel, Callie has an unsettling encounter with a vagrant, and slowly comes to believe that the tunnel -- or something living in the tunnel -- is behind a series of missing people and pets in her pregnant sister's quiet neighborhood...and may have been responsible for Daniel's disappearance as well.

Why You Should Watch It: Absentia is one of a few low-key, low-budget but well-made horror movies I've found on Netflix over the past couple of years without really looking. It's probably the best of them, actually -- one of those movies I watched on a whim because it was in my top ten recommendations and found surprisingly good. Modern Lovecraftian fiction was fairly annoying back in 2005-2010 or so; it all basically boiled down to "What if Cthulhu was inside The Computer? What if Cthulhu was in The Cell Phone?!" Because modern technology is scary and stuff, especially when you don't understand the first thing about it, as none of these writers apparently did. Lovecraft was (and still is) this jokey pop-culture figure like Nikola Tesla, and post-millennial weird fiction recycled his stories and turned everything he'd written into these "clever" little references that pretty much destroyed any sort of horror the story might otherwise have had. There was a short story a while back called "Pickman's Modem." That title alone is pretty much everything wrong with new Lovecraftian horror.

There's been some good stuff in the last few years, though. The Slender Man is probably the most interesting example of modern weird fiction out there, incorporating modern methods of storytelling such as YouTube and blogging without making the technology the thing that's frightening. True Detective is fine weird fiction by any measure, incorporating Lovecraft's mythos into the story without turning the King in Yellow into a nudge-nudge wink-wink punchline to make sure you know how clever the writer is. Absentia also falls into this sort of "inherently modern without specifically pointing out how modern it is" kind of Lovecraftian horror.

It's basically a monster movie, but it's a monster movie where you only see the monster once or twice, out of focus. The horror comes more from the relatable fear of losing a loved one, of staying in an unfamiliar house, of walking alone at night. Absentia captures like few other movies the strange, lonely, otherworldly atmosphere of the suburban night. That's a thing that's always made me uneasy; walking around in a suburban area -- such as the one where I currently live, or the one where I lived before I moved here, or the one before that -- between midnight and morning, seeing safe, familiar sights made vividly strange in yellow streetlight that casts the deepest shadows and seems to throw everything into sharp focus, is distinctly different from walking in the city at the same time of night. Even during its daylight scenes, the film captures an atmosphere unique to the suburbs -- something I've been interested in tackling with my own writing sometime in the near future. The way shadows fall and lights flicker is a subtle, everyday kind of horror.

On a side note, Mike Flanagan, who wrote/produced/directed Absentia, also more recently directed Oculus, the haunted-mirror movie with Amy Pond and Starbuck. I'll have to look into that as well.